KTM is very proud to announced that we've been awarded the Motorcycle News 2020 Manufacturer of the Year. The award recognises 2020's new bikes (KTM 390 ADVENTURE, 1290 SUPER DUKE R and 2020 Naked Bike of the Year, the 890 DUKE R) as well as our dominance in the dirt and our massive impact in MotoGP. Thanks to all involved and to MCN for the prestigious award.

On top of this, MCN have named the newly released KTM 890 Duke R the Naked Bike of the Year! Yes, the 890 DUKE R has seen off all its rivals to the number one spot. Why? According to MCN, "It’s one of the finest handling road bikes money can buy."

Want to hear everything MCN said about the 890 Duke R? Keep reading!

Reviewers 'Michael Neeves' & 'Mike Armitage' had the following to say:

It might look similar to the 790 Duke, but the 2020 KTM 890 Duke R is sharper, faster, grippier and more refined. If you’ve ever wondered what a top-level race bike feels like in the corners the KTM is an orange-tinted window into that world.

It's new engine is refined, punchy, characterful and proof that you don’t need huge power to get your rocks off on the road. The gearbox, blippers and shifters are all bang on the money, too. It’s hugely capable but as single-minded as a supermoto. If you’re not worried about that, this is the scratcher for you.

On the face of it the 890 Duke R is a slighter bigger, more expensive 790 Duke with a few more bells and whistles. That is indeed the case, but it’s also one of the finest handling road bikes money can buy.

Former Grand Prix winner Jeremy McWilliams had a strong hand in its development, so it was never going to be a blancmange, but having a devilishly fast rider in your test team isn’t always a guarantee of success. Being given the keys to KTM’s toy cupboard and able choose the best tyre, brakes and suspension is. The net result is a machine that will lean and grip in ways few road bikes could dream of.

Compared to the lower-spec 790 Duke, it sits taller for improved ground clearance and agility (its 834mm seat is 9mm higher), but what sets the lightweight (just 166kg dry) 890 Duke R apart from any number of road bikes with fancy suspension, like its close rivals: the Triumph Street Triple RS and Yamaha MT-09 SP, is the way its new fully adjustable WP Apex forks and shock are set up. 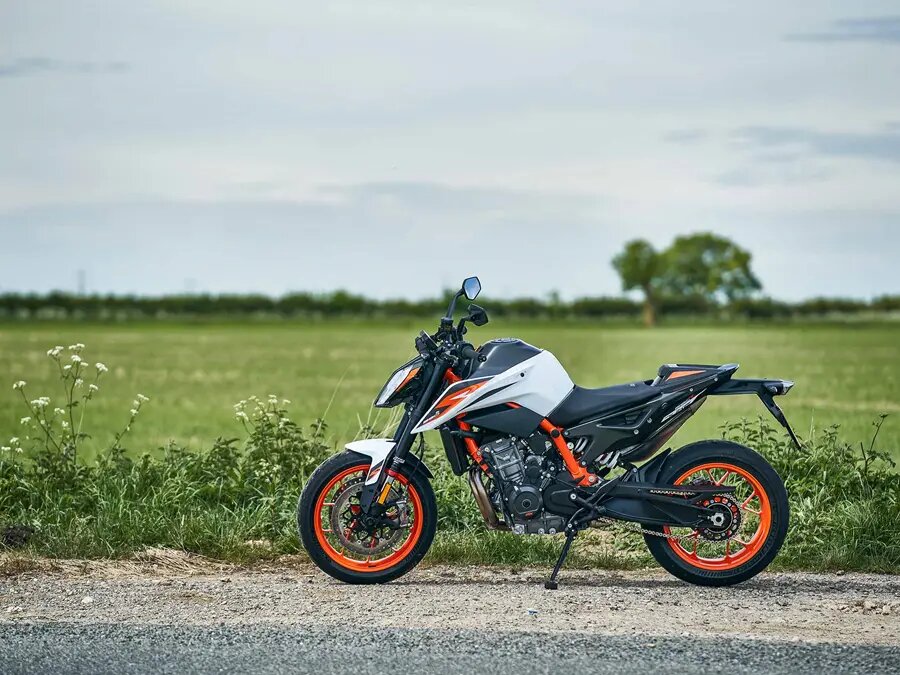 They have the kind of sophisticated damping control and perfect spring rates you’ll only ever find on a properly sorted race bike: firm and controlling, but still plush enough to suck up the bumps. Nothing mass produced usually feels this good and there isn’t a damping click or preload turn you’d want to change.

The 890’s only limit diving into corners is the rider’s bravery and with so much mechanical grip at the rear, friendly power delivery and traction control, you can pretty much accelerate as hard as you want from the apex. It gets a slight weave-on under hard acceleration at high speed, but that’s just what wide-barred nakeds too when you push-on. 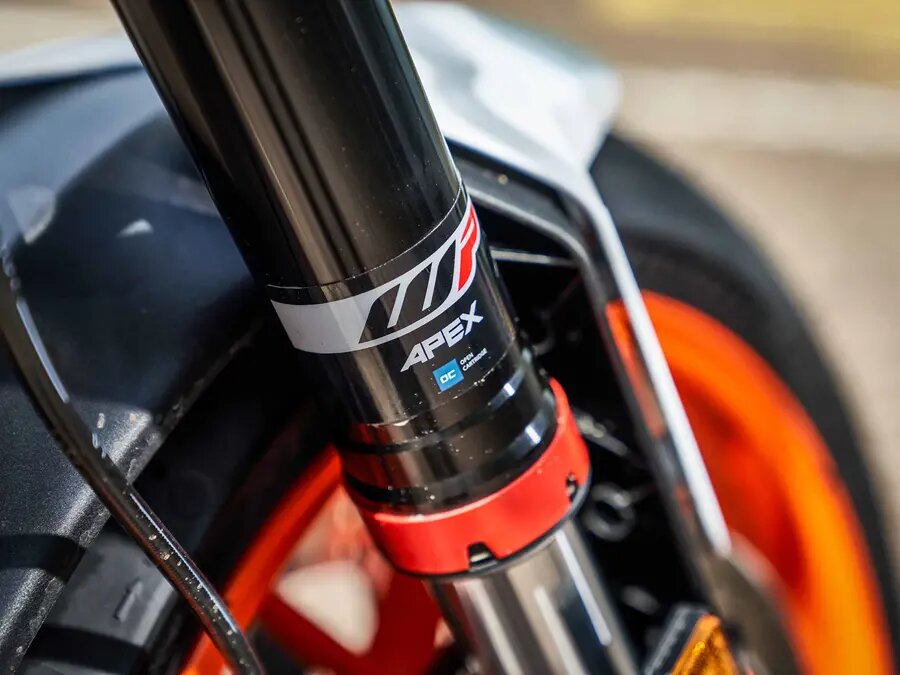 New Michelin Power Cup 2 rubber also plays a big part in the 890’s incredible sure-footedness. They have the grip and stability of slicks, which isn’t a surprise as there isn’t much tread going on, but unlike racing tyres it doesn’t take much to get lots of heat in them. During development Jezza and the boys were getting 58 degrees of lean on track and struggling to get the tyres to break loose, which isn’t hard to believe.

Stylema Brembos, normally seen dangling from the front of the latest superbikes are things of wonder, especially on a bike so light and grippy. The span and ratio-adjustable lever only needs the lightest of brushes to get your triceps bulging and the back brake is nicely weighted.

Spacious for six-footers, with perfectly positioned bars and pegs, the 890 Duke R is a one-trick, balls-out-on-a-Sunday morning pony. It’s an unashamed toy and its rivals will do distance, motorway runs and carrying pillions (the 890 doesn’t have a rear seat or pegs) better.

Starting life as the 790 Duke, the parallel twin is bored and stroked, bringing capacity from 799cc to 890cc and the compression ratio increased. Power is up 16bhp to 119bhp.

The end result is an engine that’s shouty, but smooth and full of grunt, giving the KTM the playfulness of a big supermoto on the throttle. It has all the power you need for a neck-straining naked on the road, but on track you’re going to get monstered by 1000s on the straights before they hold you up in the corners. 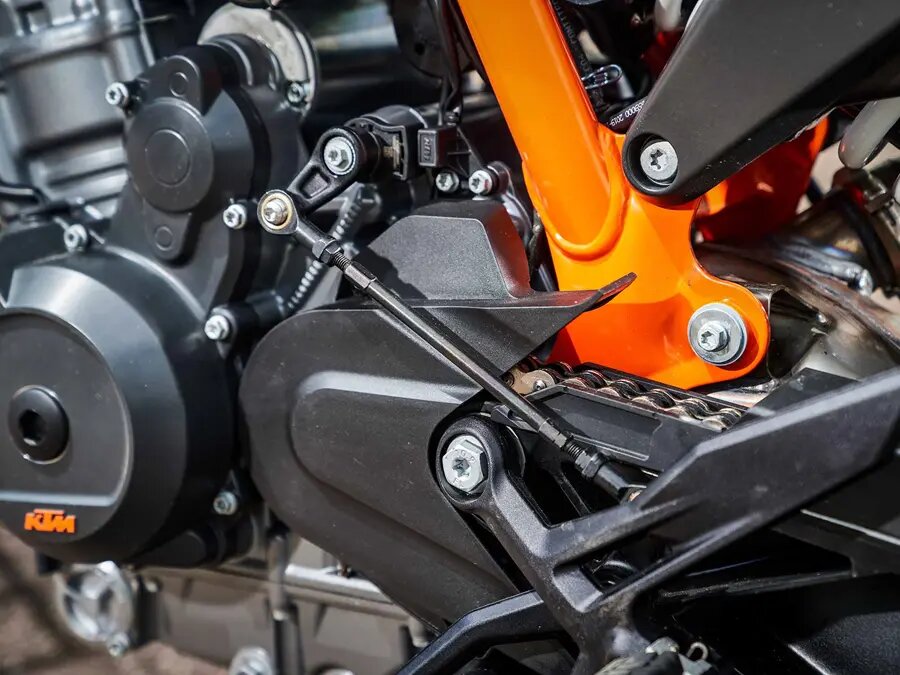 The 890 Duke R can be an angry so-and-so when no one is looking, but it’s sweetness and light when you’re cruising. The throttle action is light, the ride-by-wire perfect and the gearbox and up/down shifter as crisp as a fresh tube of Pringles.

For a parallel twin it actually has the character of a V-twin with its vibes in all the right places and an exhaust roar that’s somehow slipped past Euro 5 ears.

Fresh out of the crate the KTM is nicely finished and the bright orange wheels are fabulous, but our online owners’ reviews of the 790 Duke’s build quality and reliability are mixed, so we hope they’ve been addressed with the 890.

It’s also a bit plasticky around the edges, especially its switchgear, but that will be the last thing on your mind when you’re halfway around a corner, horizon at full tilt with a massive grin on your face. 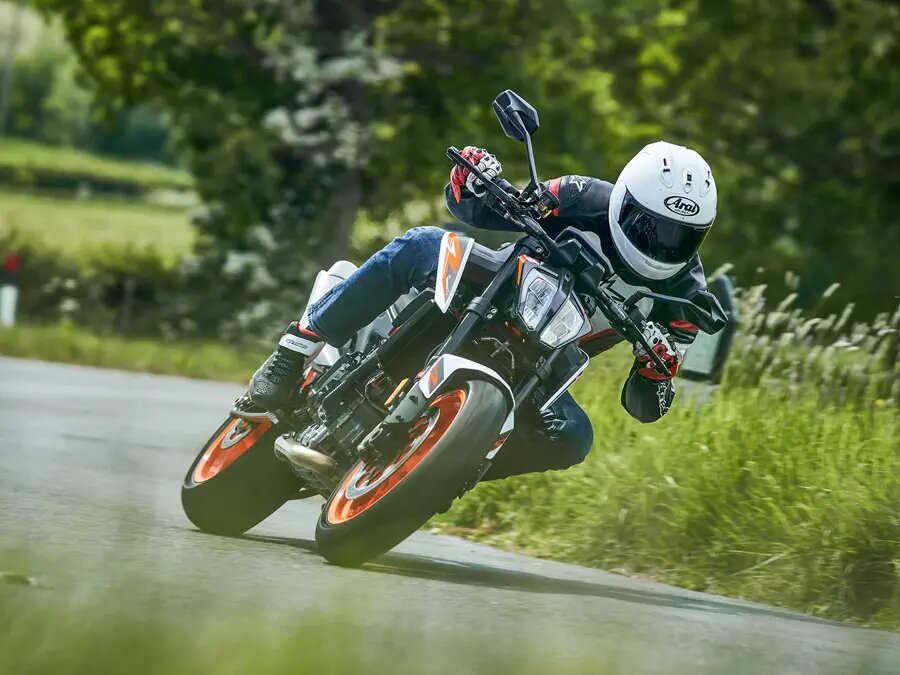 Dealer servicing isn’t the cheapest and it’s expensive for such a single-minded bike, but day-to-day running costs won’t be high and being so light it’ll be good on fuel and won’t eat tyres and brakes. 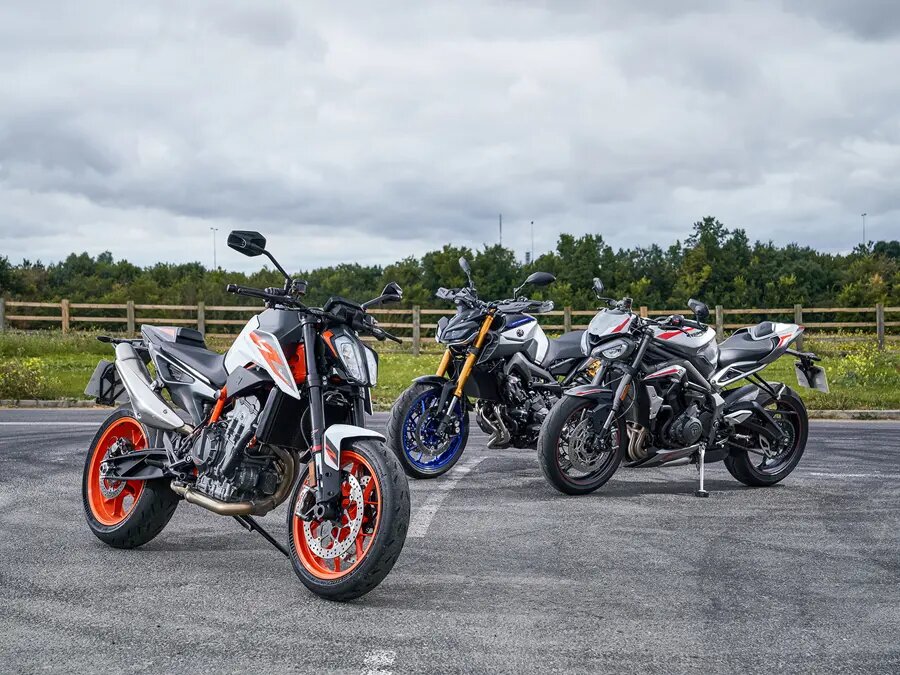 We took the KTM around the MCN 250 test route with two of its closest rivals, the Yamaha MT-09 SP and the Triumph Street Triple RS.

Triumph’s Street Triple RS is the go-to middleweight naked sportster, and it’s easy to see why: you get the performance to embarrass bigger bikes, a glistening spec and more handling than us normal folk can ever use. It’s very focused, though – if you loved the cheeky 675cc original this feels like a flat-barred R6.

Yamaha’s MT-09 SP doesn’t have the same outright handling or rush, but counters this with greater usability than the Triumph. It’s perhaps the best pure road bike here for ‘normal’ riding, and cheapest too.

But it’s KTM’s new 890 Duke R that wins. Punchy, light, easy to ride and oh-so-agile, the beefed-up twin is the trackday-ready tool you’ll genuinely want to ride every day.

As well as top-shelf brakes, suspension and tyres, you get the full brace of power modes, lean sensitive riders aids, an up/down quickshifter LEDs and a colour TFT dash.