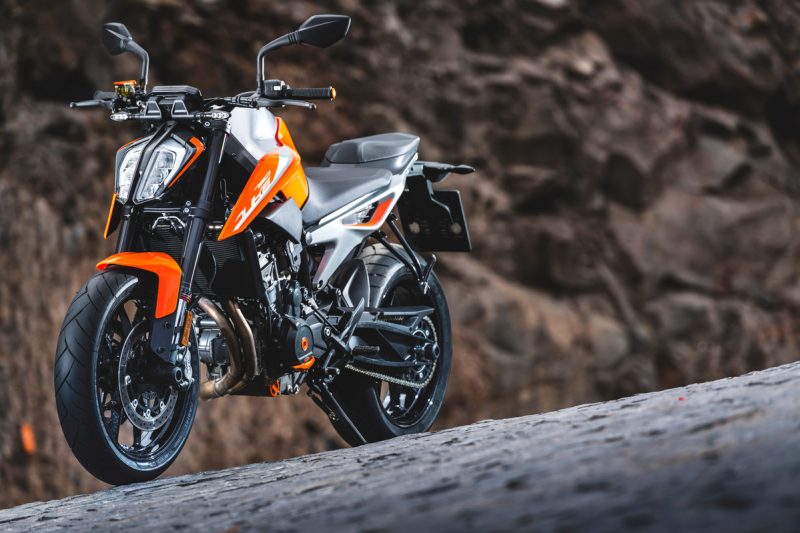 Proving once again KTM knows no other way, the Duke 790 is a complete hooligan of a motorcycle

Sometimes you have to ride a motorcycle for a few hundred miles before you work out its attitude to life, find out what it's best at and learn how it wants to be ridden. Ducati's superbikes are famous for it, if you can figure them out at all. KTM's 790 DUKE (yes, KTM insists on the shouty capitals), on the other hand, does not count itself among those bikes, because within 50 yards of first clicking it into gear GQ had accidentally pulled a wheelie and had the traction control kick in.

The mid-capacity Duke proudly wears its heart on its sleeve and doesn't care one jot for the usual formalities. Just when you thought you might've found the Duke that was the rounded, slightly more mellow of the three-strong model range you were wrong, because this one is just as bonkers as the others. 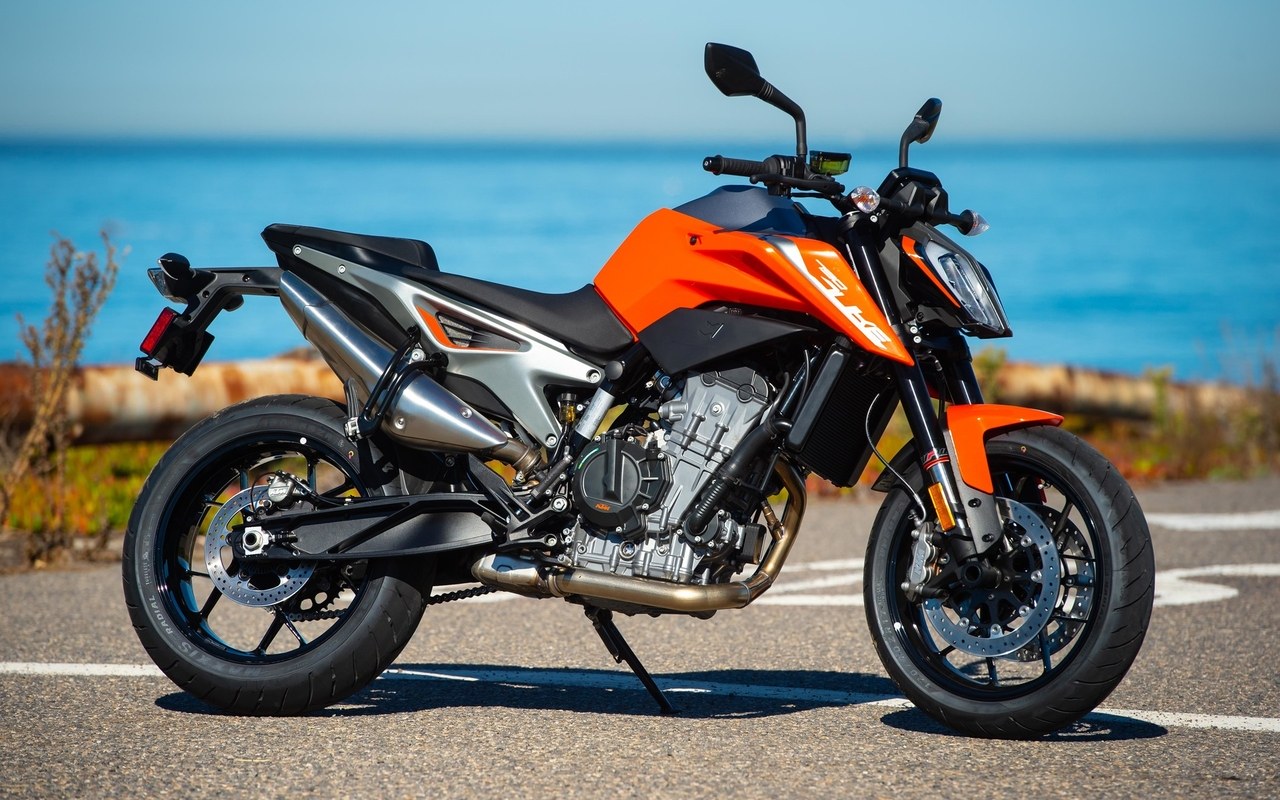 Let's step back a bit, though. What is the 790 Duke? "A mid-capacity naked bike, stuffed with electronics, boasting about its ability to make mincemeat of corners while wearing an attractive price tag" would be its elevator pitch if it could give one. A parallel twin – a first for KTM – displacing 799cc kicks out 105bhp and a lovely, flat torque curve that's alive and kicking from the get-go. There's all the modes, toys and gizmos you'd come to expect: throttle maps, traction control, cornering ABS, bluetooth and so on, plus a bidirectional quick-shifter. One pound shy of £9,000 is the incredibly reasonable price tag, but the thing that should smack you in the face – more so than the angular lines – is the fact it weighs 169kg dry. That's very, very light and makes it the lightest in its class. The elevator pitch checks out.

Even from 100 yards you can tell it's a KTM – those aforementioned angular lines and an abundance of orange give the game away – but there's plenty more to the design that you won't find elsewhere. The exhaust is reminiscent of either a handheld vacuum cleaner or a large, yawning trout and the seat has a practical, if not beautiful, two-tier design for the rider and pillion. Pay attention to the fuel tank: it's tall, short and narrow, which might look weird but it allows a couple of tricks only an Austrian engineering mind could come up with – since the air box is under the seat, the tank doesn't have to sit on top of it. The result is a smaller tank, which makes for a compact cockpit that feels far roomier than it should and a much slimmer machine overall.

The rest of the bike is as you'd expect: LED headlights at the front, round, black wheels at each end, things to hold on to in the usual spots and a stylish TFT dashboard, all built in the usual amounts of KTM quality (that'll be high, then). And, yes, the swing-arm's hollowed-out design is very much a nod to KTM's off-road roots, as is the trellis frame. 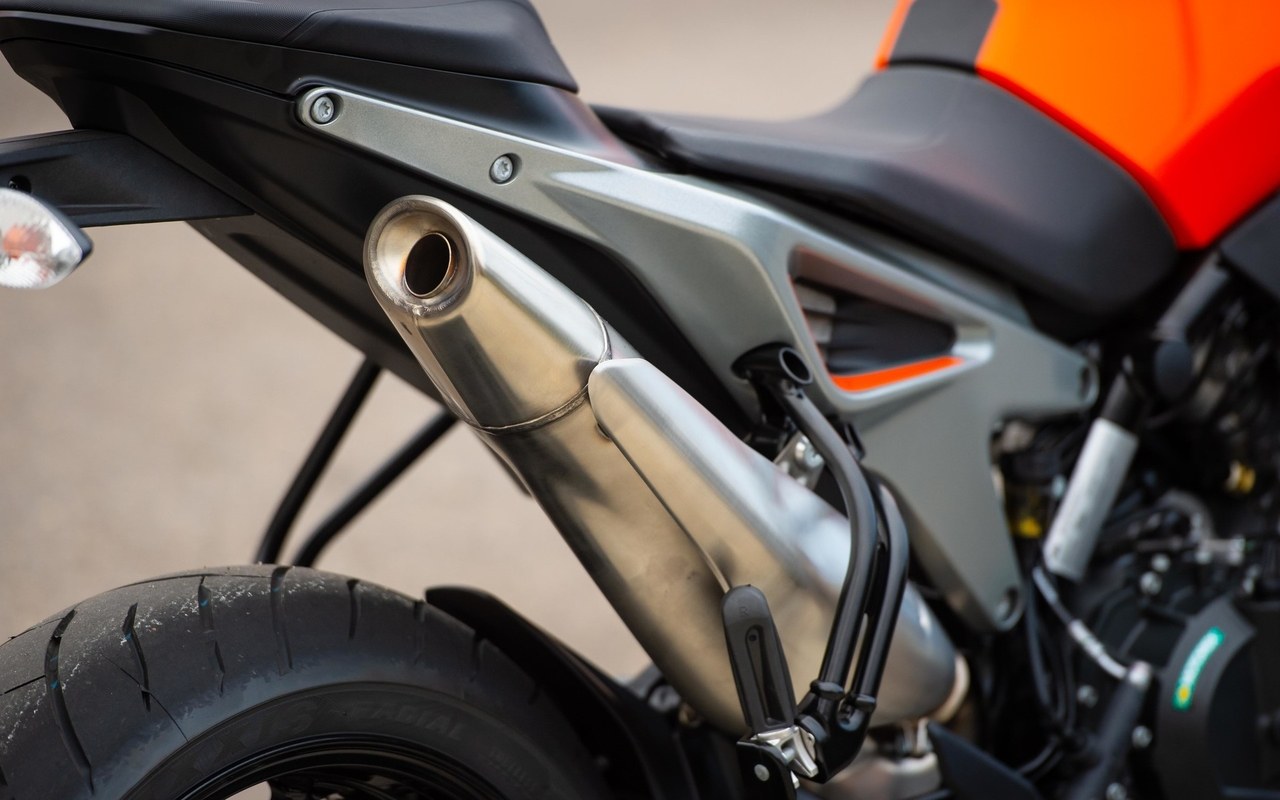 Back to the accidental wheelies. It is one lively, naughty, rampant, relentless bundle of caged-animal lunacy. With a 1:1 throttle mapping in "race" mode, it delivers everything your right hand asks for and more. It's so eager to tear off into the distance on its hind legs that you'll find yourself dropping it down to Sport mode just to calm it down a bit. Thing is, it doesn't work – it's still just as eager to win every round of traffic light Grands Prix and pick the front wheel up in celebration as it was before you went fiddling with the settings... Eventually you relent and knock it down into Rain mode... and finally, finally it's calm enough to ride around town without wondering if the helicopter overhead is tracking you.

Yet riding in town is somewhat missing the point. KTM nicknamed this bike "The Scalpel" and while it's a weapon and a riot on the commute, it offers even more for the weekend blast. Bumpier roads with tight corners show off the 790's lack of weight and its ability to effortlessly flick-flack through the twisties in a way city riding never could. Anything you can do, it can do better. The quickshifter works wonders; the higher the engine's revving the better it gets. It's got plenty of character thanks to a funky set of firing intervals and it's almost vibration free, but the main thing is it's not scary. Handfuls of throttle are rewarding rather than frightening. The brakes are good – not excellent – but the suspension's superb and never leaves you wanting. 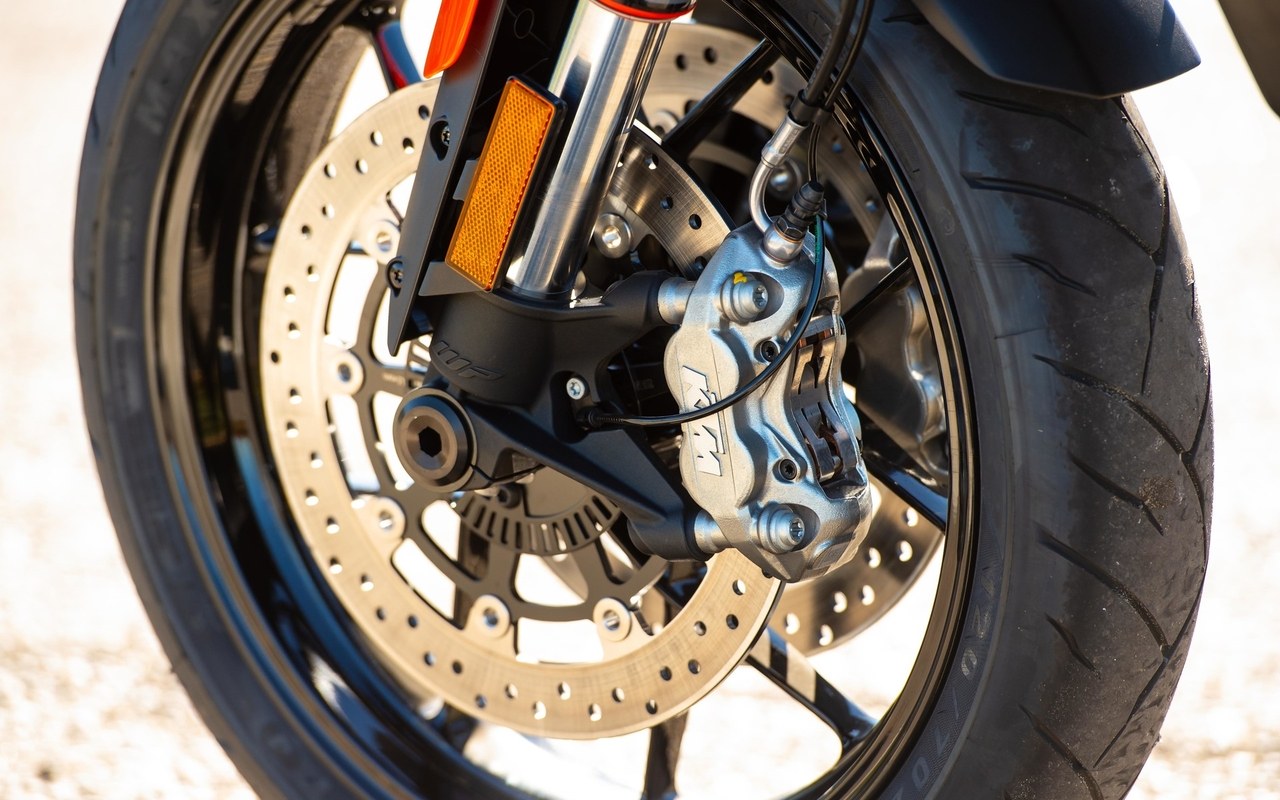 As you will quickly work out, the 790 Duke can't help but inject a little extra spice into everything it does. It'll have you hanging onto just that bit more throttle compared to any other bike like it. You'll carry just that bit more corner speed and hang onto a few extra revs before grabbing another gear, before braking just that smidgeon later. That's the KTM DNA and you can't do anything about it. Where other bikes in the class are a smidgeon more refined, or more sensible or steady, this one's like a super-lightweight fighter – quick on its feet and raring to go.

And we like that. It justifies the 790 Duke, as it has its own take on lairy. Where the 390 Duke is an excitable puppy and the 1290 Super Duke a brutally effective axe murderer, the 790's doing its own thing in an extremely usable way. It doesn't suffer middle-child syndrome one bit. Truly a bike you could never tire of, when ridden in its natural habitat.